Filter
Close filters
1 From 7
No results were found for the filter!

DANRHO Budo Belt, competition belts
All our budo belts are made of heavy-duty, pure 100% cotton with...
from £4.58
Tip 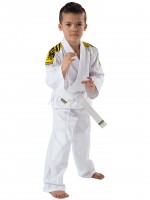 KWON CLUBLINE Judo | Ju Jutsu Uniform Junior
Scrupulous attention has been paid to the design and functionality...
from £16.58 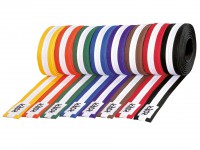 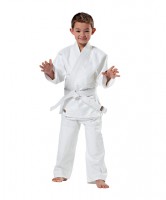 Judo Uniform Randori
The white KWON CLUBLINe Judo Gi is ideal for children and...
from £23.25
Tip

Dojo-Line Judo-Gi
Prooven single weave - uniform for students, made of bleached white...
from £29.92

With its characteristic white uniform, the differently coloured belts und the well known throws and floor exercises Judo ranks among the most popular and prevalent combat sports in the world and of course in Germany as well. The name is derived from the Japanese term for “soft”, “gentle” or “flexible”. Therefore, in Judo the motto is: Winning by yielding. The underlying guiding principle for this motto is to achieve the maximal effect by minimal use of power and technique.

Judo is practised completely without aids, such as weapons. Thus, this is not an attack combat sport, but a pure self-defence technique. Judo is not as old as other combat sports; it was not developed until the beginning of the 20th century by Kano Jigoro (1860-1938).

For many people Judo is not only an ordinary kind of sport but a life philosophy or an opportunity for further positive personality development. One who understands Judo correctly will not only perform it in the sports halls on the mat, but will make this an integral part of his entire life. Mutual help and understanding plays a large role in this. The basic concepts should be applied, to achieve mutual progress for oneself and the counterpart as well as common welfare.

Classical Judo consists of the so-called pre-arranged patterns and the free practice or competition. These two columns are completed by teaching lectures and teaching conversations by the master which are supposed to show the theoretical part of the sports and train the spirit of the fighter. However, today the competition philosophy dominates very strongly in Judo, particularly in Germany; therefore, in most cases, the main emphasis is put on training the various techniques.

Equipment of a Judoka

Traditionally, the Judo fighter is called “Judoka”. He wears a white uniform of pure cotton, consisting of pants reaching to the ankles (called “zubon”) and a mid-calf length jacket (called “Uwagi”). The jacket is open in the front and is being closed by a belt. Depending on the level reached, the belt has a specific colour, beginning with the white model up to the black belt. Moreover, distinction is made between pupil levels and master levels. The pupil levels start with the white and go up to the brown belt; finally the master levels start with the black belt.

In addition, for competition fights in particular there are blue Judo uniforms, so that the adversaries can be better distinguished during the fight. However, this is not mandatory and is not applied in every fight. For easier distinguishing, differently coloured belts may be used as well, for example a red and a white belt. These are then worn in addition to the usual belt, which indicates the level of qualification and the level reached in the Judo sport respectively.

The KWON online shop stocks all textiles and accessories for Judo sports, for example suits in different sizes and qualities and of course belts in other designated colours. Furthermore, here you find anything else you need for getting into Judo sports or anything you need as advanced athlete as well.

To the prone techniques, with which are used to fix the opponent into prone or supine position so that he cannot escape any more if possible, belong to the so-called holding techniques too. However in Judo there are escaping techniques, aiming exactly at escaping from such fixation. Where the fight partner gets into such a situation from which he can no longer escape independently, he can knock on the mat with any part of his body and thereby express his submission.

Today, in most cases, the techniques learned in Judo sports are not needed for the actual self-defence anymore, but are used in competitions. Every Judo competition is held in form of a man-to-man fight, whose aim is to use the techniques in a way that the opponent is thrown on the back in a controlled way. This supine position virtually counts like a knockout in boxing, thereby ending the fight.

Moreover, there is the possibility of winning a competition in Judo by points. This is always the case, if, by the time the fighting time has elapsed, no fighter was able to decide the fight in his favour. In case of infringements of rules, the fighter is booked. If both players score the same results after expiry of the fighting time, then the number of bookings received decides on the victory. If both fighters have received the same number of bookings, then a draw is pronounced in non-championship fights. This does not apply at championships; a decision is necessarily required here. In such case the fight is being continued and there is a so-called "Golden Score". The fight is immediately finished as soon as one of the fighters is awarded a score or gets a booking. So this scoring technique is to be compared to the "Golden Goal" previously existing in football.