Filter
Close filters
1 From 17
No results were found for the filter!
Tip

DANRHO Budo Belt, competition belts
All our budo belts are made of heavy-duty, pure 100% cotton with...
from £4.58

Foot Protection Anatomic
The distinctive anatomical form of this protector ensures an...
from £30.25 £35.60 *

KWON Bag Large
Made of highly durable and strong Cordura® material, with shoulder...
£26.73 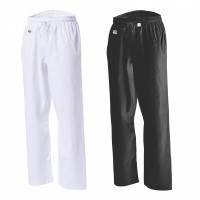 Martial Arts Pants
The KWON CLUBLINE single pants made of light-duty material has an...
from £9.92
1 From 17
Top seller
Tip

You are looking for the real “kick”? You would like to perform a sport that combines the best of classic boxing with impressive movements and fighting sequences from the Karate and Taekwondo sports? You would like to use your whole body for fighting and would like to train almost every area of your body effectively to that end?

Then you are just right with Kickboxing! This is a type of combat sport – similar to boxing – allowing both hitting with hands and fists respectively as well as kicks with legs and feet. Only hits with the elbow and the knees are not allowed in some countries and associations but allowed in others, depending on the rules in force in the respective country and association.

The same applies by the way to holding and bringing down the opponent. There are no uniform rules applicable for these techniques either; they vary from country to country and from association to association.

However, some rules and bans apply across all associations and have meanwhile been banned in all countries of the world, where Kickboxing is practiced. These include for example deep hits in the genital area or hits on the opponent’s back. Unlike in show sports such as i.e. wrestling, throwing the opponent is not permitted in Kickboxing. What’s more, the fact that attacks on eyes, ears and other sensitive body parts are taboo, should be self evident.

Unlike other types of sports such as Karate or Taekwondo, Kickboxing cannot look back to a long tradition and was developed in the occidental cultures. Nonetheless, many elements have been adopted from Far East combat sports as well as from traditional Boxing, which, for many people, makes Kickboxing the melting pot of the most diverse cultures.

It cannot be denied that Kickboxing is a quite dangerous sport. Therefore it is mandatory to protect oneself by respective equipment, which is also to the benefit of the opponent. KWON offers all accessories and the necessary equipment for professional Kickboxing sport, beginning with authentic textiles up to any kind of protectors. Please find a sample of the range of product available on KWON_

Just like in traditional Boxing, most of the time, Kickboxing athletes do not wear anything but trousers. The trousers are made of a glossy and very richly decorated material and are held by a broad waistband on the belly.

There are special tracksuits available for Kickboxing training - in particular in the cold times of the year. They are made of isolated materials keeping the body from cooling down. The (long) trousers of a Kickboxing tracksuit are often available separately.

As in the case of conventional boxing, in Kickboxing short coats with hood for entering the ring exist as well. They are supposed to keep the body warmed up prior to the fight, heated up.

The various Types of Kickboxing Competitions

In principle, fighters are first classified in different weight classes in the Kickboxing in order to create the prerequisites for a fair fight. Depending on his fitness and degree of experience, the athlete may then take part in different types of competitions. The most important of them are:

Surely the most interesting but also the most dangerous variant of Kickboxing is the so-called full-contact. Unlike the other types of competition, full contact fights are held in a boxing ring - therefore not on mats. In fact, there are many parallels between full contact Kickboxing and the more known boxing, for example, that a fight can be won either by knocking out the opponent and also by points. A technical knockout can also mean victory for the opponent.

At Semi-Contact Kickboxing (also called "Pointfighting") the fights are mostly held on upholstered mats, not in a conventional boxing ring. The characteristic for this type of Kickboxing characteristic is, that the fight is interrupted after every body shot and that the fighters retake their initial position afterwards. During the interruption the respective hit is judged by three referees. Only if these referees can agree on an assessment, does the respective get a point. The one awarded the most points by the judges finally turns out to be the winner.

The light-contact type of Kickboxing is not a beginner type or a form of this sport to be learned particularly easily as the name could suggest. On the contrary: With regard to technique and endurance, light contact fights are particularly demanding. In contrast to semi-contact, this fight is not interrupted after every hit, but - similar to boxing - is staged in rounds. So the judges judge every single round. For light-contact fights carrying suitable safety equipment is obligatory; among other things this includes teeth protection, foot and shin protection, head protection as well as with women, a special breast protection.