Filter
Close filters
1 From 12
No results were found for the filter!
Tip 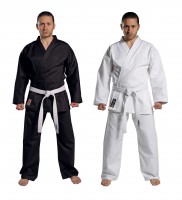 Karate Uniform Traditional 8 oz.
Proven durability: this 100% cotton karate uniform can take it all!...
from £24.92
Tip 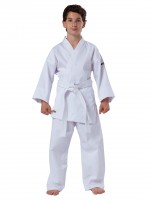 Karate Uniform Basic
Precision craftsmanship and a cut designed especially for children...
from £14.92 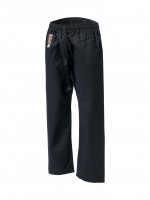 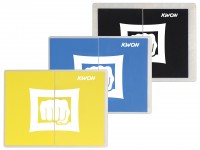 Shin and Instep Guard
Safety is the most important requirement in any sport. KWON elbow,...
£19.73 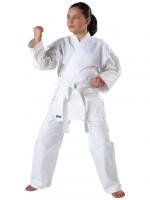 In the 60s and 70s of 20th century the films from and with martial arts legend Bruce Lee hit the cinemas and reached cult status within the shortest time. That caused many people to develop a special fondness for the combat sport karate – just the one with which Bruce Lee had become famous.

As Karate (translated into German, "empty" hand), one describes a known martial art, the roots of which lie in the 19th century Okinawa. She developed from Okinawa traditions to which little by little Chinese influences were added. So the origins are in Japan from where Karate would eventually spread over the whole world at the beginning of the 20th century.

Characteristic for the karate sport are the various hitting, pushing and kicking techniques with which the attacks on the opponent are executed. These techniques are completed by various methods for self-defence, e.g. in the form of predefined blocking techniques.

It is this versatility which accounts for the attraction of the Karate sport. In Germany the athletes are organized in associations in large numbers and are mostly trained by experienced teachers. Even other, occasionally trendier, combat sports could not affect the popularity of Karate over the years; its popularity remained.

In order to be able to execute the karate sport safely and injury free, one needs suitable protective equipment. It is particularly of great importance for training; however, individual parts are also used in the competition.

You get the complete assortment of safety equipments at KWON, your online shop for professional and high-quality combat sports equipment, for the karate sport, starting with training head protection up to hand side protectors allowing for specific hits albeit harmless for the athlete. Here some examples:

As a protection from kicks and hits, carrying a body protection vest is recommended. It is equipped with soft foam material cushions and effectively absorbs even hard hits.

The KWON shin and instep protectors are also upholstered softly. They offer protection against injuries in the most sensitive places of the legs and feet, thereby providing maximum safety in training and in competition.

The head is by far the most sensitive part of the human body; even the most minor injuries can have a very drastic effect. Therefore, the head should be protected as well as possible in combat sports, in particularly in Karate as well. The head protectors available at KWON are all tested and were awarded accepted quality seals. They possess excellent absorption qualities and a very good fit.

What are the requirements for carrying out Karate safely and professionally?

As in the case of many other combat sports, both the physical constitution as well as confident command of the basic techniques are prerequisites for mastering a fight (and the respective training) safely and successfully. Special attention is given to speed. By that one understands the speed of movement but also the speed-strength. In this respect, the physical constitution plays an important role, thus effective endurance training being an essential element of almost all karate training.

Unlike what is common belief, fighting with weapons is not an integral component of the karate sport, although they are partly used as an aid in training. The human body is exclusively used as a "weapon" in the karate sport e.g. in the form of various strangleholds or also by attacks on special nerve points of the opponent. Moreover, as in the case of the Judo, some lever and throwing techniques come to be used in Karate. Some still seek to toughen the limbs by crushing objects in karate training. These can be brick, boards etc. Meanwhile these practices have however become quite controversial.

The clothing is characteristic for the Karate sport. It consists of simple white trousers which are tied in the area of the hip. To this, the fighter wears an open jacket, also in white colour which is closed by a coloured belt. At the same time, this belt, by its colour, shows the degree reached in the Karate sport. This procedure is already known from Judo. The goal is to reach the black belt or the third DAN. It is also characteristic for the Karate that the fighter does not wear any shoes. Whether in training or in competition: Karate is always executed barefooted.

Sure, Bruce Lee has been dead for a while now. Nonetheless, the Karate sport has been highly popular in the entire world to this day. The association are very actively working with young talent. One, who stocks up the required safety utensils, will be able to rejoice in this sport for a long time to come.